Fake Clouds Are Worse Than Fake News – A Comprehensive Review 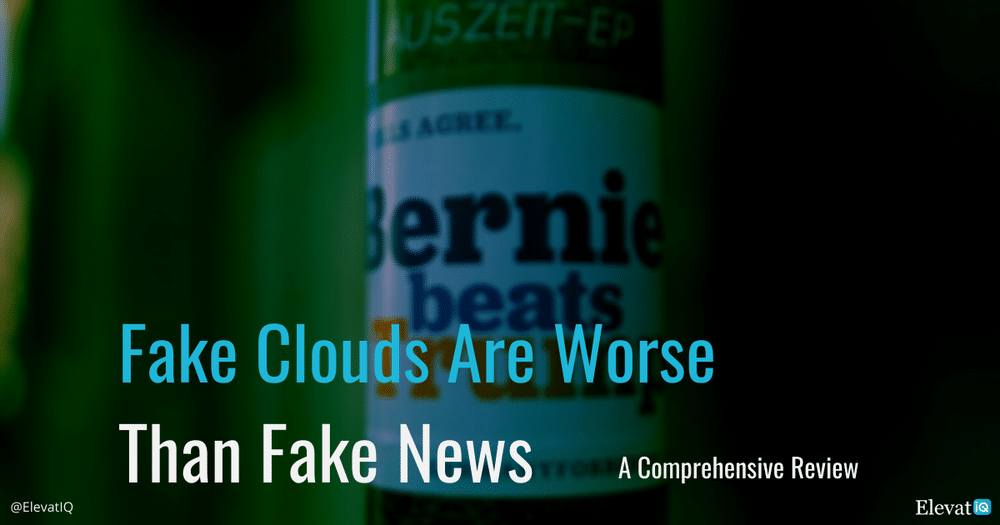 Buying a fake cloud ERP system could be worse than not considering a cloud system at all. Irrespective of whether you are inclined towards on-prem or cloud, both could be great strategies as long as they are natively-built for each option.

This article provides an in-depth overview of how fake clouds work and why they could be worse than these options.

The comparison between on-prem and cloud-native design principles

If you have a compelling reason to buy an on-prem system, you should purchase a system designed utilizing on-prem technologies and optimized for the on-prem infrastructure.

Taking shortcuts of deploying a natively-designed on-prem ERP application on the cloud is remarkably inefficient.

Taking shortcuts of deploying a natively-designed on-prem application on the cloud may be more comfortable and might reduce time-to-market. Still, the app would rarely be efficient with the most impact on user experience and efficiency, defeating the overarching purpose of automation through your software investment.

On-prem ERP applications are monolithic, tightly-coupled, and designed to work only on desktops.

Traditionally, the most on-prem ERP applications followed monolithic 3-tier architecture, where the customer-facing tier would be a thick UI layer written in on-prem technology.

As you might be able to relate with applications such as Excel or old accounting systems, they performed amazingly well on a desktop system due to the design of their services or database layer aligned to provide a superior experience to desktop users.

They were equally inefficient on mobile or browser. Imagine performing data analysis using your favorite spreadsheet on a mobile device.

The cloud ERP applications are composed of a self-independent, self-multiplying network of reusable building blocks catering to multiple channels’ needs.

The modern cloud applications, by contrast, followed either similar 3-tier or microservices architecture.

Still, the most significant difference between on-prem and cloud is that the tiers in the cloud world are not as tightly-coupled as they would be in the case of an on-prem application.

Why is on-prem ERP design inefficient?

To understand the implications of a monolithic, inflexible architecture, let’s review our workforce habits and how they have changed from the 2000s to the 2020s.

In the decade of 2000, we all went to offices, we had access to mobile technologies, but the devices back then were relatively primitive and could not perform the heavy processing they can do today.

No one thought we would be using an ERP application on a mobile device. The way we thought social media was only for kids. We have been proven wrong with our assessment and capabilities of these technologies, and so have some legacy ERP vendors.

When they created these apps in the decade of 2000, the only channel they had to worry about was desktop.

With mobile devices’ penetration, we have far more channels in the form of mobile, tablets, apps, notebooks, desktop, IoT machines, and sensors.

This paradigm shift is only going to grow, as the devices get more processing power, and we get data that helps in making business decisions.

Thus, they need to rewrite their apps following lean cloud architecture principles where none of the layers are tightly-coupled, and the processing components are independently scalable.

To understand this, think of monolithic applications as a giant machine that could do a lot of things from the processing a sales order to closing your books.

Suppose there is a spike in sales quotes, which doesn’t necessarily result in a corresponding increase in load for financial transactions. If you want to handle this workload, you will have to buy another instance of that giant machine irrespective of these machines’ usage levels. This approach could not only be expensive, but it could also be a waste of your resources.

Now contrast this with a cloud app where the cloud applications are a vast network of “micro-devices” with individual responsibilities, and they are independently scalable. They can multiply themselves as the load increases, which helps address the needs of each channel better as they could have its traffic and volume.

Why is user experience needs so different between on-prem and cloud ERP applications?

While it’s a great idea to create this network of micro-devices, if each channel had its way of communicating with users, there will be a significant switch when users moved one device to the next.

Suppose you created a report to track the KPIs from the office on a desktop application. When you step out of the office, you wanted to continue monitoring this report from your mobile device. Imagine how you would feel if you had to look at a screen with a completely different look-and-feel while switching them.

Consequently, cloud applications utilize a technology called HTML5, which automatically takes care of user experience on different devices and channels. Think of this as a technology that can morph into various shapes and sizes automatically as the resolution of a device changes.

Why can’t legacy ERP apps do the same what their cloud ERP counterparts are doing?

Legacy ERP applications didn’t have access to HTML5 technology. Moreover, they didn’t have to worry about it because their customers were happy as long as they created the best desktop experience.

With the recent changes in how we work and how we access the information, these on-prem applications are no longer sufficient as they are not mobile workforce friendly, and not as agile.

How much effort is required to convert these legacy ERP apps into modern cloud ERP applications?

ERP applications could have more than 10K tables and thousands of screens and reports. If you want to break this giant machine into these networked miniature devices that are self-sufficient and self-multiplying, it will require decades of effort.

To put things in perspective, a programmer may be able to independently develop a screen or a report in a month. Imagine how much development power and, as a result, the investment they need to move these applications to newer cloud technologies.

If the effort is so high, how can legacy ERP vendors be cloud-ready in such a short time?

Consequently, legacy ERP vendors have discovered the shortcuts that can expedite this process.

One commonly known alternative they take is to port the entire app as-is and put it in the browser window. If you follow this approach, as you can imagine, it will be like watching TV from a browser window. With TV, the video players take care of optimization as the resolution and the form factor changes. Plus, you don’t have to interact with it.

Imagine trying to click a dangling menu with your finger on a small mobile screen. You also can’t open this app in multiple tabs in a browser, the way you could open Facebook. These are some of the limitations that we can perhaps talk in 30 seconds. There are more profound implications of these shortcuts, but the only way to know them would be by actually using a legacy ERP app that is trying to pretend to be modern.

What else has legacy ERP vendors done to cut short the process?

The majority of legacy ERP vendors also focused on efforts where they have the highest economy of scale and ROI as the licensing revenues in the case of the cloud are far leaner than their on-prem counter-parts.

They had to catch up with modern cloud vendors in reducing their costs, or they will soon be out of business.

They also had the challenge of pleasing analysts firms such as Gartner that understand these capabilities at a deeper level. These analyst firms maintain a checklist with the options such as multi-tenant, multi-site capabilities so that an average business user can easily compare these systems.

Have analyst firms such as Gartner caught up on this issue?

Since legacy ERP vendors wanted to compete with the modern breed of cloud vendors, they prioritized their investment dollars. One strategy they considered is to satisfy the checklist of these analyst firms, which also had the highest ROI for them.

However, because of this issue, the complete redesign and user experience took the backseat as the legacy ERP vendors knew that the user experience is not as quantifiable. Their checklists touch such issues only at the surface level with yes-no questions such as: is the app easy to use? Such items would not be able to catch the underlying architectural issues and implications because of them.

Also, ERP vendors were aware that they could create a shiny facade (or fake cloud) to lure them as most customers and analysts are likely to review the software at a surface level with the help of a checklist.

Do these issues ever get caught during or post-implementation?

The user experience component of a cloud application is critical as it has the most impact on efficiency, but measuring and quantifying user experience is always the hardest.

Consequently, the legacy cloud ERP vendors have been successful in selling their fake cloud applications but failed in meeting their efficiency objectives because of poor user experience.

Because of this poor user satisfaction, the cloud technologies often get blamed for the users’ complaints that they are not as efficient as their desktop counterparts. When in reality, the cloud is an amazingly powerful technology as long as you are using a real cloud and not a fake cloud.

Where does each ERP vendor stand with their cloud maturity?

If you look at the cloud maturity of ERP vendors in the market, none of them are as deep with their capabilities as their on-prem counterparts.

It will take years before the cloud technologies can replace their on-prem version completely.

The fake cloud vendors may have rewritten their apps by 20-40%, while 60-80% is still monolithic, legacy architecture.

On the other hand, the modern cloud vendors are lean on their capabilities, covering only 20-40% of the functionality that a robust enterprise might need.

So, does it matter whether we go with a fake cloud or a real cloud ERP vendor?

While they both could be even with their cloud maturity today, the legacy vendors will take longer to catch up with modern cloud vendors as remodeling an old house is always harder than constructing one from the ground up.

Also, remember the network of “miniature devices” with cloud vendors? These devices are not only independently scalable but also highly modularized and reusable.

This modular nature of the cloud application allows them to reuse pre-built components and keep building on top of them.

As you add more capabilities, the faster you can develop. This “self-multiplying” effect allows the cloud ERP vendors to be faster than some of their legacy counterparts.

As a result and as you may have noted, some of the pure cloud vendors, such as Acumatica, are among the fastest-growing cloud ERP systems.

Now that you understand why fake cloud ERP systems are worse.

Your choice is to be with a vendor that may have deeper capabilities today but might be slower in rewriting the whole app designed for modern cloud architecture.

Alternatively, you can work with a lean cloud ERP vendor in a phased-manner where you upgrade a small division with a fully-enabled cloud solution and grow with them as they get more in-depth with their capabilities.

By selecting a native cloud ERP vendor, you will be fully matured with cloud in half the time while reaping the benefits from day one of a native cloud system.

ERP Implementation
Send this to a friend